Thinking about what to do and where to go? Well, look no further than Le Massif de Charlevoix. Skiing at Le Massif is like nothing else in Quebec. Want proof? Last November, Club Med announced that Le Massif would become the company’s first ski resort on Canadian soil—even before the resorts out West!

In addition to the 120 million dollars to be invested by Club Med between now and 2020, the resort itself has plans to complete its own four-season recreational tourism project featuring unique activities and a wide range of accommodations. Their main challenge: preserve the site’s authenticity and rugged beauty.

Although Le Massif doesn’t compare to British Columbia and Alberta when it comes to vertical, it nonetheless boasts the highest in Quebec. What’s more, Le Massif’s long, winding runs reserve something very special in store for those skiing there for the first time—they all lead to a beautiful spot on the shores of the St. Lawrence River where the water stretches twenty kilometres wide, giving it a magnificent ocean-like feel.

Of course, since the base of the mountain sits alongside the river, you’ll be treated to breathtaking views: drifting ice of all shapes and sizes, deep blue (and sometimes hazy) winter waters and tiny cargo boats off in the distance, making their way towards the ocean or en route to Montreal. No other ski resort in the world offers anything even close to this.

And, although you might miss the charming old school buses that used to take skiers from the base to the top in the 1980s, we’re sure you’ll appreciate the supersonic lifts that make it easy to enjoy at least four or five descents per day. 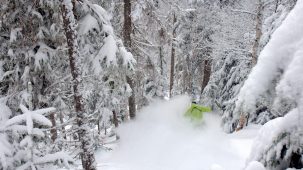 Travel enthusiast for over three decades, Monyse has been working at Gendron Travel for 25 years. She has since visited over 15 destinations in the Caribbean and West Indies, went backpacking in South East Asia for three months before settling down and discovering almost every skiing destinations of western Canada, the United States, France, Switzerland and Japan. She’s also been on road trips to California and has visited the USA’S main cities such as Boston, New York, New Orleans, Las Vegas, Los Angeles, San Francisco, Orlando, Vancouver and more… With her vast experience of travels and vacation coordination, Monyse will be an asset for your vacation.